GVS Moves Past the First Round of Playoffs 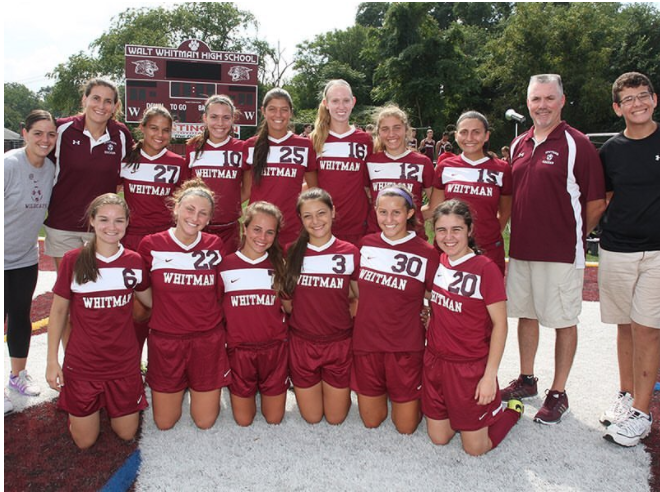 Walt Whitman’s Girls Varsity Soccer team came out on top last Friday against Smithtown East. The Wildcats, ranked 16th, defeated Smithtown (including coach’s daughter), ranked 17th, when lead scorer, Rebecca DeWitt #10, crashed one into Smithtown’s goal with only 8 minutes remaining. From there, the Wildcats held their opponents, ending the game 1-0.

This is the Girls Varsity Soccer team’s first return to playoffs since the 2010 season. Current senior starter, #7 Gianna LaMay’s  older sister, Jackie LaMay played on the team during the 2010 season. That year, the Wildcats pulled off a huge upset by beating the number one seed. Now, as the current team looks to repeat history, Jackie LaMay wishes them luck, “Seeing my sister in the same situation GVS faced 6 years ago makes me so proud and I truly relish the time I had on the field. As a former player, I know how much a win would mean to these girls and to the South Huntington community. We faced the same uphill battle they face on Monday and I have no doubt they have what it takes to take down #1 seed just as we did.”

Alums are not the only ones excited. The defending state champion boys varsity soccer team has been supporting the girls since day one. Captain Blake Aronson expressed “I am so proud of our girls. We have seen them work so hard for playoffs year, after year, and they have finally reached their goals. We can not be prouder or louder for this team.”

However, no one is prouder than Coach Biancomano (first on the left). In 2011, Biancomano coached the Stimson Middle School girls soccer team. Many of the girls from that team are the successful seniors of this year’s varsity team. Coach Biancomano sentimentally said, “These seniors are the first group of girls I have ever coached, for that they will always be special to me. To them I want to say: Play with your heart, trust your teammates but most importantly have fun.”

Whether they win or lose the next game, the Whitman Girls Varsity Soccer team has brought respect back to the program by showing what hard work can do. The next game is Monday, October 24th, at Northport. Congratulations to the girls and their coaches on an amazing season and good luck in playoffs!