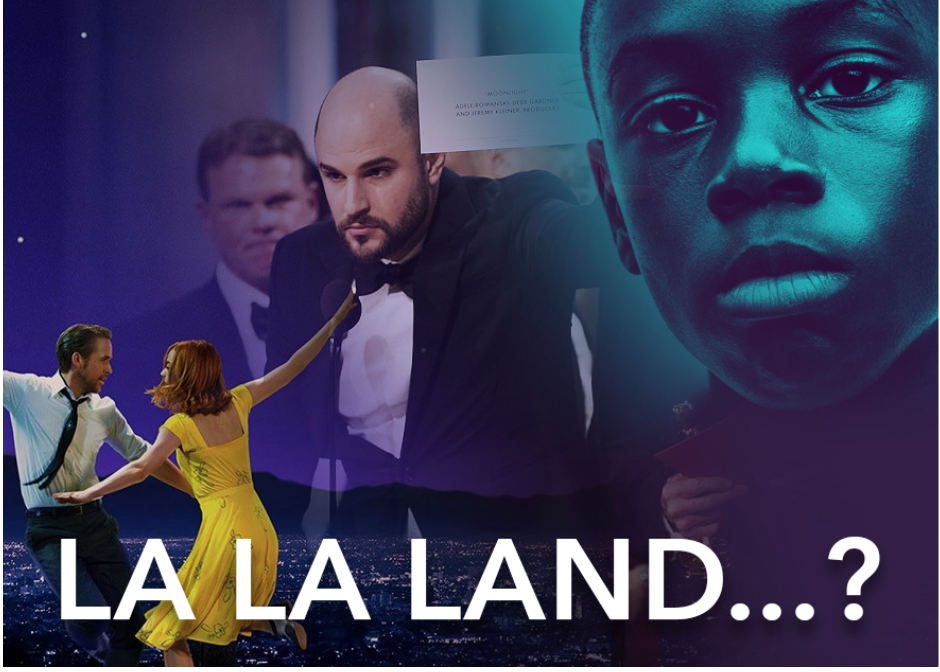 After the countless racist accusations directed at the 2016 Oscars, this year’s annual awards night was certainly a hot topic. Many movies that showcased people of color, as well as the actors and actresses who starred in them, were nominated numerous times at the 2017 Oscars. Some of the movies showcasing minorities were Fences, Hidden Figures, Moonlight, Loving, Kubo, and Moana.
When the time came to reveal the winner of Best Picture, many sat on the edge of their seats waiting for the big reveal. When the moment finally arrived, however, 2017 delivered,another award mix up. This mistake was even more cringeworthy than the 2016 Miss America Pageant announcement by the one and only Steve Harvey. The moment is always built up; there is a lot riding on the title of Best Picture since it is the award of the night. As presenter Warren Beatty stared down at the little white card of fate in front of him, it was clear he was confused to say the least. Upon seeing his hesitation, co-presenter Faye Dunaway, preceded to take the envelope and announce none other than La La Land as Best Picture. One of the producers, Jordan Horowitz, proceeded to give a heartfelt speech, leaving some audience and cast members in tears only to be informed that there was a mix up in the cards and that the presenters were accidentally given the card for best actress. Horowitz was incredibly gracious and announced that the winner was indeed Moonlight and not La La Land.

As he handed off the Oscar, it was clear that he was disappointed, but also extremely proud of the cast and crew of Moonlight who were the true winners of the sought after award. After the painfully awkward moment many were left questioning which movie really deserved to win. There was a decent amount of speculation as to whether or not the win was over compensating for the aforementioned accusations of 2016. To get my answers, I flocked to my fellow students of Whitman and asked for their opinions on the matter. I was shocked when all of them gave me more or less the same response in favor of La La Land. Olivia Pulvirenti who saw both films informed me that in her opinion both films are “well executed and worth seeing,” however, she believed that La La Land’s ending is what gives it the leg up, referring to that of Moonlight’s as “disappointing.” Another student, Karina Lew, called La La Land “an amazing film,” but also referred to the story as being somewhat “strange.” It seemed she was unsure whether or not it should have won. Lastly, the harshest critic of Moonlight went on to express that in his eyes “Moonlight was not worth seeing” and told me that I “should not bother seeing it.” All in all, the verdict on whether or not Moonlight deserved the win will remain just as the question of how many licks it takes to get to the center of a tootsie pop, bearing the answer that the world may never know.