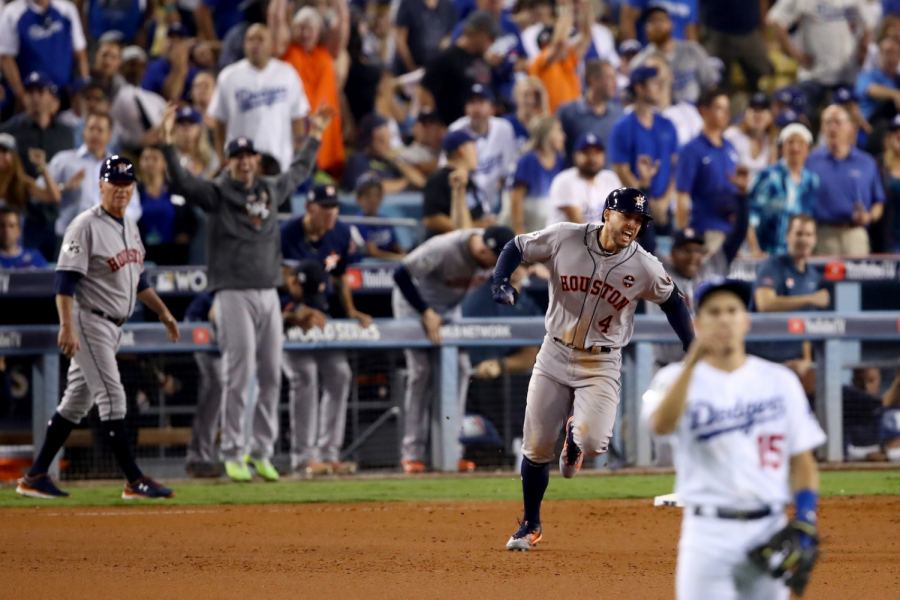 The 2017 World Series featured two heavyweight teams that dominated both defensively and offensively. The Houston Astros and the Los Angeles Dodgers battled for the championship title while providing fans with an explosive series that ultimately culminated in Game 7. In this winner-takes-all game, the Houston Astros prevailed as the world champions.

Before playing against one another, the teams were required to rise through the ranks. The Los Angeles Dodgers reached the World Series by defeating the Arizona Diamondbacks and last year’s champion, the Chicago Cubs. The Houston Astros continued on by defeating the Boston Red Sox and the New York Yankees.

From the moment the 2017 World Series began, fans nationwide were entranced. The game started out with a Dodgers win as Clayton Kershaw delivered brilliant pitches that resulted in eleven strikeouts. However, the Houston Astros bounced back as George Springer went on a game-winning run in the eleventh inning. The third game also featured a Houston win as Lance McCullers Jr. threw curveballs more frequently  than had ever been recorded since the pitch-tracking system began in 2008. was. Not only was the athletic prowess on display a large draw, drama off the field drew in audiences. Controversy arose during the game over a racist gesture that Yuli Gurriel made towards Yu Darvish. This resulted in a five game suspension for Gurriel at the beginning of the 2018 season.

There were numerous stand-out moments, so Game 4 had no lack of stellar players or plays. This match saw a Los Angeles win as Joc Pederson delivered a sensational multiple-run game. As the last game of the series in Houston, the fans gave all their support, shrieking alongside Minute Maid Park’s train’s piercing whistle. Houston headed to Los Angeles only a win away from winning the championship. However, the Los Angeles Dodgers would not go down without a fight, as evidenced by the stellar performances given by Pederson and Kenley Jansen. In the end, the Los Angeles Dodgers didn’t stack up when the Astros demonstrated the effectiveness of their serious, collected attitude, putting on a winning performance. This win was a sorely needed one, for the Astros were crowned victorious in a period of disheartening defeats for Houston.

Outside of the sports arena, Houston has recently faced tough times, namely devastation wrought by Hurricane Harvey. The flooding essentially paralyzed Houston for months. Even now, people are still recovering, a difficult fact to remember once the news coverage switch to the next natural disaster. In that context, the championship trophy was needed now more than every to provide the city with the glimpse of hope it was in need of. This win had the ability to uplift the spirits of thousands of people, proving that sports boils down to more than simply the scores.

Whitman Junior Thomas Braglia was supportive of the Astro’s win, declaring that they “deserved to win as it was good for the city.” On the other hand, Jake Cartisano, another upperclassman, was derisive of their success, believing that the “Yankees should have beaten the Astros in the first place.” However it was Whitman Senior Onkar Dogra who put it best, touting the Astros’s “great offensive power” and defending their win, understanding that they “won for a reason.”

Many Whitman students were really excited for the postseason because the New York fan favorite, the New York Yankees, had won the Wild Card Game and were in the playoffs. However, the Yankees were left in the dust as the Houston Astros and the Los Angeles Dodgers progressed to battle it out amongst themselves, resulting in a Houston triumph.