The Carnival, Bonfire, and Powder Puff—A Great Start to Homecoming! 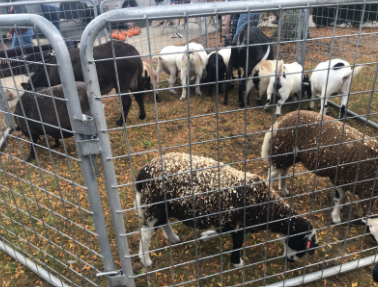 It all started with the carnival. Various games and booths were set up all along the Whitman horseshoe for people to enjoy. There was a ball toss, an axe throw (no, not with real axes), whack-a-mole, a petting zoo, pumpkin decorating, and so much more. And of course, the dunk tank, where Mr. Pineda himself, decked out in scuba gear, had volunteered to be dunked. Some of the school clubs were hosting games, some were selling snacks. There were even free snow cones. Yep, that’s right, free! I was surprised too. People old and young came from all around to celebrate the festivities. It was a huge success. The carnival ended with the annual bonfire—a pyramid of wooden palettes rose up in flames as everyone watched. A pretty cool sight if you ask me.

A senior who asked to remain anonymous was attending the carnival for their first time as a member of the Red Cross Club. When asked about their favorite part so far, they said, “The ponies! They’re my favorite animal.” They also said that school events such as Powder Puff and the carnival cause their “school spirit to skyrocket!”

Following that, it was time for Powder Puff. Every year, the juniors and seniors face off in a football game, where the girls play football and the boys put on a halftime show performance. Early that morning, those participating ran through the school, wearing their skirts, wigs, eye black, and waving flags to build up hype for what was to come. The game started at 6. Touchdowns were made on both sides, as Mr. Graziano tried his best to not mix up the names of the players. When halftime came around, it was time for the boys, all dressed up, to put on their cheerleading performances. Both teams showcased incredible, hilarious performances, even with a music malfunction during the senior’s dance. The game ended 48-24, with seniors taking home victories in both football and cheerleading.

Senior Raymond Nazario participated in the boys’ halftime performance. When asked about Powder Puff, he said, “I had fun cheering during the game for the girls and was thrilled to be a part of the halftime dance.” He was proud of how the seniors performed and felt that their preparation paid off.

All in all, both the carnival and Powder Puff were huge successes, and were a great way to get back into the school spirit after the absurdity of last year! This was truly a night that will go down in the history books of Walt Whitman High School.