Senior vs. Faculty Sports Night: A Night of Competition, Glory, and Chaos 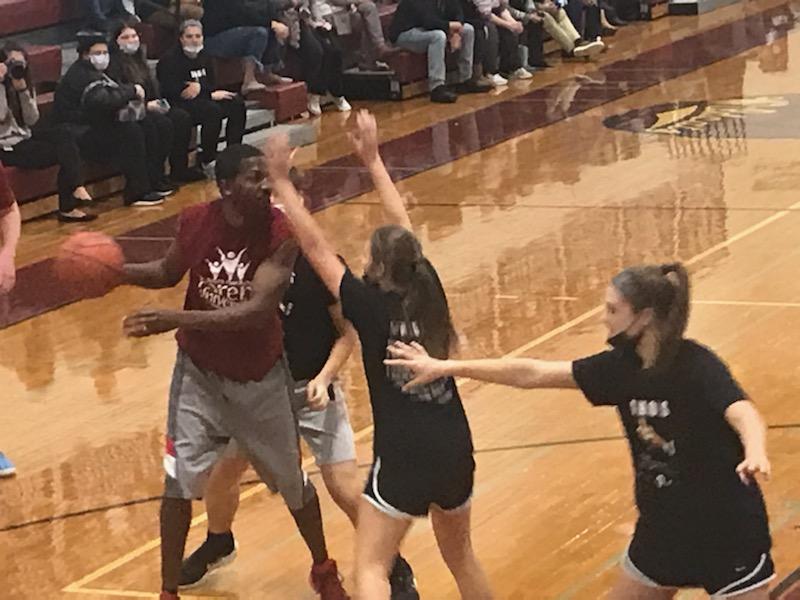 The seniors versus the faculty. One night of sports. Let me tell you how it all went down.

It all took place in the south gym. On one side sat the teachers, and on the opposite side, the seniors. Then the first game was announced: volleyball. The most notable moments from this game were star volleyball player Tyler Phillips hitting the ball so hard it was heard around the world (probably), and Mr. Graziano’s interesting strategy of punching the ball as it came to him, which actually kind of worked, funny enough. But after two rounds, the seniors would take the victory.

Basketball was next. This was a wild one. Dr. Richards played for the faculty. He’s a Whitman graduate who won the basketball championships in the year of ‘84. And let me tell you, he’s still got it. Dr. Richards dominated the court, and that’s not an overstatement. Despite this, the seniors put up a really good fight and won yet again. The seniors had held their lead and were going strong.

It was now time for dodgeball: the most popular sport of the night with the most people signing up for it. There were two games with a new group of students each time, each lasting around 3 minutes. There was no clear-cut winner for this one, as after 3 minutes there were still a fair amount of people on both sides. But I was really glad dodgeball was one of the sports because it’s been a while since we played dodgeball in our gym classes. It brought back some good memories.

For Mission Impossible, each team must make it to the other side of the gym without touching the ground, using various items such as cones, hockey sticks, gym mats, and those cute little scooters we used in gym class as kids. This was the climax of the whole night. Tension had built up between the seniors and faculty. Pure chaos erupted. It started off normal but each side had different strategies. The faculty were sending their team off on scooters, using hockey sticks as paddles to propel themselves, while the seniors took the items and lined them up across the floor, like a bridge. Though as Ms. Drohan was pushed down the court on a scooter, a student took it upon themselves to hop over on a cone and flip it over. And it gets even crazier. On a big gym mat placed in the middle of the court, a senior and a teacher were playing tug-of-war with one of the scooters. Another senior threw over a pool noodle for their teammate to use and started whacking them with it, to no avail. But it was hilarious. The faculty would take the win on this one, as their scooter-pushing strategy worked wonders, while the seniors weren’t able to make it very far at all.

The following game was musical chairs and I’d never seen it played like this before. Chairs were set up in an oval formation with seniors and teachers lined up around them. Whoever was the last one standing would win it for their team. Though when the music started, there wasn’t a lot of movement from anyone. Everyone found themselves too scared to move that much so it was a lot of standing and taking a small step every few seconds. Fast-forward to the final six: one teacher, five seniors. It looked hopeless for the faculty. But then one senior got out. And another. And another. And then one more. And it was down to the final two. Ms. Barbuto, against all odds, won it for the teachers.

Tug-of-war was the final game of the night. One team had to pull the opposing team past a certain point into the middle to win. The seniors would ultimately win this one. And the night was over.

Later, I talked to Ms. Drohan, the teacher who was flipped on the scooter, about her experience. She had this to say: “I would say Senior vs. Faculty Sports Night this year was great fun had by all! The Class of 2022 definitely brought their A-game, flipping teachers on their scooters in Mission Impossible and spiking volleyballs so hard you would think it’s dodgeball. They came to win, and that’s just what they did! Faculty definitely felt the loss the next day too, I know I did!”

Adrian Spencer, a senior who attended the event, commented, “I’m really glad I signed up for this. Mission impossible was the craziest part of the night. I had a great time.”

All in all, Senior vs. Faculty Sports Night was an unforgettable experience and may just be one of Whitman’s greatest traditions.